Entries taken out of draft form may, depending on the age of the posts, republish to the top of the weblog.  I note the original posting dates in republished entries if the order shifts.

Posts that relate to my de-posting (saving in draft form) entries at Ana Verse, past and present:

Ann, I think this coat is totally you!!  It's so cute, wish they had my size!

Check out the following NORDSTROM.com selection(s) hand-picked by [LJT]:

Click on the link(s) above for more details on the above item(s).


Dear Lena (first reference at Ana Verse) or Lana (second reference about a year later, my mistake), not her real name or names, LJT:

I tried on a Fleurette coat in Aubergine at home (shipped from Nordstrom) and even called the company in New York before ordering, regarding size, and the woman who works there (or owns the company?) said the coats run "true to size."  I was between a size 8 and 10.  I ordered both ($795 full price, no fur or leather trim) and returned both to Nordstrom at MOA.  The wool is nice, but the cut ran short in the waist on me and felt a little baggy at the small of the back, regardless of size.  I am surprised by the prices of wool coats (suddenly, this year?), quite high.  [My Nina Ricci pretty brown Merino wool original car-length coat with sheared beaver collar cost $450 on sale from $900 at Lord & Taylor in Houston in 1995.  My L&T charge card survived the b'cy in 1997 with a zero balance but expired without a L&T store here.  Lisa Pottratz's mother illustrated fashion for L&T from home in the '70s.  There is more to say about fertility, naming, and diabetes.]  I am so glad I kept the charcoal wool UGG coat (shearling collar), $385 on sale [November 2012], with its great quality and fit.  I guess manufacturers want a lot for fox fur trim suddenly, too?  I bought two thick cotton knit hats last year at Hoigaard's with little fox tufts at the tips: about $49 each.

How is it going?  I got a new haircut at Metropolis Salon.  Here's a pic I took of myself (in the middle of some night, after two dozen attempts to capture a nice photo): 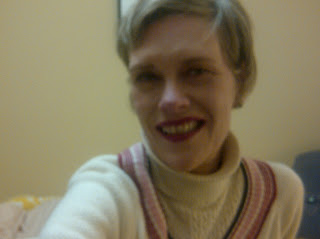 That was before I cut my hair further myself, in the front (on both sides) including  bangs.  I left the back almost entirely alone.  Keith charged $108 for the cut and style (including my $20 tip) and to remove the chemically-mysterious-yet-I-believe-related-to-the-Keratin-treatment BEEHIVE that formed on January 4-6, 2013.  I did not ask Kelly for a whole or partial refund for the treatment application of November 21, 2012.  I saw her a week ago, the second time I went to the salon one full hour late for a consultation.  She had told me on the phone she had never heard of a Keratin beehive.  [She said a change in medication might cause the hair to knot.  I ran out of coffee early in January and didn't drink coffee, except one cup, for several weeks.  I also lost weight, not dieting, upon leaving my long-term service companionship.  That wall to the East formed of iron along the CST line.]  Only I, and to a lesser extent, Ned, know the exact details of what I did with my hair, shampoo, conditioner, water, diet, geographical location(s), social circumstances, medication(s), coffee, beer, glass or two of wine at Christmas, etc., that took place then.  Medical records kept by the psychiatrist (M.D. by definition) and pharmacist could establish a detail or two as well.  Let's assume that my stable regimen did not go to my hair at the exact moment a beehive hairdo started to form.  I think Keith may have claimed to somebody or other at Metropolis [not to me (objective form of the pronoun required there)] that I had not washed my hair in seven weeks, not true if so.  I washed it every week and a half-to-twelve days (as usual) and brushed it every day.

I may try to write an essay about the Keratin experience [including a passage about the white woman (prostitute, Jeff Hansen said) whom he and I saw at Red Dragon in Minneapolis in 2011, whose "bun" stood about sixteen inches or so above her head.  I would not have known then how she might have achieved "that look," but I was impressed.  A physical fight with other ethnically-divided women ensued indoors and may have escalated outside, away from my witness]. I have no photo of my beehive (six inches at its tallest, measured from the top and back of my head).  I felt there was no way for me to get a photo of what the bun felt like to the touch—a permanent bun I could neaten with clips.  Worn "down," it looked ragged (damaged color and texture, both).  Fully written, it might be a 3,000-word story of hair sacrifice.

I tried but could not get a good shot of my hair as it looks today (February 9, 2013).  I look fine in the mirror and window reflection and haggard in digital Blackberry shots.  Richard Avedon has been quoted as having said or written, "The camera doesn't lie."  It Mayberry R.F.D. that Tina Brown lies, however, since evidence that Avedon said or wrote that line, printed in The New Yorker, alongside a photo of him some year before he died in 2004, is now not easy or impossible to locate via Google.  My photogeneity is uneven in digital and film photography, both.

More a little later, hope your February is melting slowly.

P.S. With your permission, I would like to post this email as an entry at my weblog, Ana Verse, subject to my own minor editing.  I will not use your name or email address, if so.

A later version of this letter appears at Fictionaut:

[I prepared this story post prior to LJT's response.  I sent it to her as an email 2/9/2013 4:44:57 P.M. Central Standard Time, and I know, by personal experience, that she checks her email rather infrequently.  Since today may be the only day I feel likely to fuss over this piece of writing, I called her, and she said, "Sure, honey."  I feel concerned by the charge of "self-plagiarism" leveled at Jonah Lehrer, a professional writer and journalist, by (named?) members in and of the mainstream press. For my purposes, I have practiced and believed that stating a dual-context (without identifying my email recipients by name) might be enough, and, to note, I do not expect writing or plagiarism, including of oneself, to be paid.]
Posted by Ann_Bogle at 7:14 PM No comments: