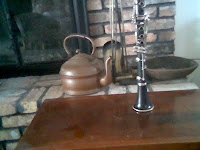 
Aaron called to say his wife’s sister had been killed. She’d been beaten for an hour then shot between the eyes by someone she knew, someone backing a jealous girlfriend. I didn’t believe that, but I believed someone had killed her -- until they knew more -- slain. He asked me to pay for the funeral. After his divorce from his rich second wife, he had filed chapter seven. He said, “You have money,” and, “My wife’s family are white trash.” At one time he had wanted to marry me. He could have said “my third wife’s family,” but he said “my wife.” He had a job. I said, “Aaron, you earn $90,000 a year,” and he said, “Shut up” and “fucking bitch” as I might have said “goddamn.”


Nancy called to say the housing market had slowed to a creep, and she was running out of cash. Her mother had died leaving her several million in real estate and locked assets. She was tired of it! she said.


My sister called to ask for $200 for a dress form for her clothing design business. She pitched it like a saleswoman. I had spent $400 on her birthday the week before that, thinking it was extravagant and due to having something.


My mother called to invite me to a play. I felt like I owed her, and I did. I bought the tickets.


At 60, Brian, a music prodigy, who had rent control and a house he inherited in New Jersey, never called. I called him. He and his wife, a publishing executive, couldn’t buy groceries except rice and beans. Chop-chop salad, I said.


Jason called before his chapter seven to ask me how to file. He worked nine-hour days trying to sell Chevrolets and had borrowed $60,000 to pay bills: daycare, mortgage, food. “Black is up, red is down,” I said, knowing he turned to pleasant memories of lawbreaking when he felt discouraged. I asked him to meet me for coffee. He said he hadn’t bought a coffee in a year.


When I was poor, too poor for lunch out or coffee, cash poor but rich in time, the word broke had too catastrophic a meaning, so I said poor to give it balance, to live inside it. I was eating, practicing at gentility and at saying “fixed income.” My friends lived flamboyantly with millionaires they ended up not marrying. The therapist for the county suggested I move out of my mother’s house and into government housing.


Who remembers? What do any of us remember of those times?


I am a would-be philanthropist with my nest egg, but I would go down. The egg came from winning a poetry contest: $20,000. The text of my poem is as follows and appeared in a hard cover volume called Touch of Tomorrow, $80 a copy:


I had told three people who later called broke of my success. I said they can write a poem, too: anyone can! They said they didn’t want to write a poem. They said they were too busy working to write poems. When they realized all I intended to give them was a story about a poem, they said: Why didn’t I get a job (if I couldn’t be useful)?


Anger management, the therapist said, so I went. The therapist there scowled at me for coming in late. I realized I was angry because I knew no one who could meet for lunch. Why did poor people go to therapy? They borrowed money for housing; why not borrow money for business school? What had I learned at leisure school: the days went by slowly, the weeks went by fast. I didn’t know how to pass time; it passed me, and it couldn’t be saved. Time kept running at me, flapping its salty deck in my face like A/C.
Posted by Ann_Bogle at 10:58 AM No comments:

I changed my mind about what had taken place: I had failed improperly, not, as I had at first believed won every heart. I had not won every heart. I had failed to note it. The hearts were in the field. The hearts, our hearts, our two tall hearts, our too-tall friendship, too tall for men, our hearts in our eyes, at a level, to the side, our hating to do this: to win, we lose. In shoot the moon, one must win the Queen of Spades and win every heart besides. The Queen of Spades is worth 13 hearts. I had lost the Queen of Spades. I had not kept my eye on the prize: the prize is men’s eyes, eyes of surrogates, lechers, lepers, lawyers, leaders, landholders, landlubbers. The Queen of Spades had not won every heart, but it was not in her heart to realize it, and now: what difference did it make? She had reported her gain. Had she not won her own heart repeatedly, to her own self-satisfaction, had she not concealed it, not robbed? Didn’t she make sense to herself, wasn’t she pleased? Didn’t her publisher—name withheld—vie for her in the heart-sniffing world of connoisseurs? Didn’t the losers sign off at the end, due to a formal requirement that they admit defeat to her, the winner of hearts? Didn’t her hearts all fear her? I was not yet beginning to fear her. I admired her, as I admired all good people. Her quip was a dagger that stabbed out of her mouth, insisting on the laughter of the people around her. Incest, she laughed first, to a famous poet about a famous poet, whose biographer vied to be yet more famous.

Did her face require so much studious fascination? I had looked at the side of her face more ways than one—the sort of face she wore but also the sort of face her parents, who were God to her, had given her, her ancient bone structure, her judge’s eyes, her smile like the Mona Lisa’s. No man would add a mustache to that face. I had not “bested” her. I was not best. I was better and “sincerely.” It was for men that we had slowly abandoned our happy female natures, in favor of our female utility. There were men who had not seen her naked (in the flesh) but who had wanted to: She looked better naked, men said, following counsel; she had a little widow’s paunch. She went giddy turning down hearts of five men and breaking open the marriage of a sixth. Later, she bore two children and took another from its mother; in that year of winning hearts (all the hearts, she still firmly believed, her looks like a dragon’s), she bore herself like a “widow.” Men edged up to that spot, to that kinetic circle with one woman inside, the men on the skirts of her central position, wanting to touch him: her father, wanting to meet him, to know him, to pass his tests, to be put to the test for his riches, but they’d already had her, and the father, not hearing all of this ridiculousness, girl-to-woman, woman-to-man, serenely born, knew she was not a widow! The hearts-winning the mystery, in that year of her life.
She had not won every heart, though she had won the Queen of Spades, and I had failed to win her: Ace, 2, 3, 4, 5, 6, 7, 8, 9, 10, Jack, Queen, King. I had lost, sorely, had failed like no other: no diary could tell it! She flew pyramidically to the bank, in generous forms of self-appreciation, nodding to buyers that she had “shot the moon,” that the anonymous missing other person had failed miserably while trying to shoot the moon, a quip, a dagger, her laughter lunging ahead of theirs, required. Neither of us thought of real winning. We set about brilliant losing, dark angel forms of luck and greed, the desire, the craving, the need to lose so strenuous, in fact, that one wins, but we tied at 13. She was 26 when she faked her victory; I was 29 when I lost mine.
Under the covers, the dark bleeding iris melts its moon, its room, is first one iris then two, then a triple gold, a girl, a follower, a believer, a friend, just sniff her: she’s real, petals the scent of themselves, of each phrase. She is dowager, maiden, handmaid, kitten, coat rack, stamen, the height, the glory; the night she leaps toward and whispers to, the air, the pillow that buffets her crazy hair, without its claws, its courageous stare: it is and isn’t there, both dark and fair. The queen of hearts is worth one there.
Posted by Ann_Bogle at 10:35 AM No comments:

Composing in my head this afternoon, I wrote a fast masterpiece. I had not had a glass of wine nor eaten a fruit; I had climbed a hill in high gear. Pushing against the pedals in sport sandals and pedal pushers, a “crossbody mini” (as such purses are called in the industry) holding my nature-man cigarettes, phone, keys, and no notepad, bobbing against my backside, my organic cotton royal blue t-shirt, I saw phrases, a seven-pack of lines, every line its reasons: nothing reasonable on the page's blank and nothing out of order. Every minute its thing. Every thing its minute memory. Every memory its own account threading rivulets to sea, spilling water to wall flowers.

What would be perfect.

Here, indoors, sitting merely where the equipment is, after a drink with the meal, nothing comes but the memory of heightened tactics.

I sing better in my mind than I sing aloud. Mentally, I sing soprano.

The story was about the adulterous man who shaved his head in spring. The story was about the Houston police devising a punishment for the adulterous man -- shaving heads of adulterers would be an excellent idea to them except the adulterer had beat them to it -- never letting him cut his hair would be another. Not that the courts would cite it. Not that the adulterous man was balding or a skinhead and so had shaved it; he was a thespian. The Houston police devised a punishment for the adulterous thespian that would not hurt the nights or household income of his French young wife. The Houston police caught him drinking. The parking lot behind the tavern emptied of its hundred cars. The police wanted that one bald thespian's car: The car was a Houston police car bought at auction and stripped of its decals. The police in their turquoise squad cars followed the thespian in his plain turquoise car as it followed a slate blue car Mondays and Wednesdays to a street far from where the thespian lived with his wife. The thespian smoked a roach on the way, proudly unaware that the police were following him, preferring to think that they were riding beside him.

That time the judge sentenced him to five AA meetings per week, a work permit (he kept the car), plates in the driveway weeknights by nine.
Posted by Ann_Bogle at 2:08 PM No comments: