This old man stays in bed all day reading a book of Polish poetry, trying to remember what he’s heard about Venus Fly Traps. He knows they grow nearby, in a nature preserve, but he can’t remember which one, and his car is unremarkable—he can’t go from preserve to preserve looking for fly traps. He can ask Aldo. Aldo is his best friend, married but separated, with the heart of a hunter. Cousin can say, “It’s cold out here, old boy,” and Aldo will reassure him, as he always does, that Cousin’s indecision is the right one.

Cousin is a solitary, and his proper heart beats hard against his chest. He regulates it by running five miles a day. He drinks hard liquor in his white, empty living room. He has work to do, articles to write.

“It’s cold out here,” begins one article about hauling his married friend’s car from the shoulder of the highway to the nearest repair shop. Afterward, the two men drink shots of tequilla and shoot pool. They play for the married man’s wife. The narrator wins the game but goes home without the wife. Moral: Some things you don’t do. A job well done. He made it all up. He got $900 for it on the first round and $400 or so from seven other newspapers.

Cousin dials Aldo and gets his machine. He buzzes into the receiver while Aldo’s message plays.

Then he calls Aldo’s wife, Marietta, the editor, ready to ask her about his latest piece. Her machine picks up. “Marietta. Cousin. Haven’t heard from you. Thought I’d give you a try.”

Darkness comes early in December. Cousin flicks on the light, picks out a tape. He slices open the boneless chicken breast and chops enough garlic to starve ten fevers. The phone rings. It’s Ellen, the woman he’s been screwing since September. She says she’s hungry, but he doesn’t want to feed her. He tells her he’s already eaten.

“What do you expect with a name like Cousin?” Petra says and hands the cue to Ellen. Marlboros dangle from their lips. They’ve plugged the jukebox, and men hover over it and in the doorway.

“His sister called him that,” Ellen says. “Significant because he likes his sister.”

“How can you stand it? I would have killed him by now.”

“He tells me I don’t know how to suffer properly.”

“Ask for a revolution, get Summer of Love,” Petra says.

“The beginning was good. That’s what he likes. The moment when you’re driving in the open air and your hair is flying and your skirt is whipping up around your knees, and he’s smoking, of all things, and happy and looking at you. The first date. Don’t know what might happen. I tell him you don’t know what might happen once it’s started either, but he doesn’t believe it. Is he a womanizer or does he fake it?” Ellen shoots and misses. “Says later she seduced him. ‘Really hard to do that,’ I say.”

“He laughed. He always laughs. It means he can do what he wants.”

“You need vegetables,” Petra says. “We’ll cook for you, give you vegetables.”

“Then you can tell me what it’s like not to be hated,” Ellen says.

“Ben is sweet. He’s really sweet, but I haven’t been alone for two months. He’s always there. Always touching me. I feel like his mother. I can’t stand feeling like his mother. I want to scream, ‘Don’t touch me. I’m not your mother.’ I told him that, one day, told him I was feeling cowed. He says he doesn’t want a mother, doesn’t know how I got that feeling.”

“It sounds good to me,” Ellen says. “Remember chaos?”

“I miss chaos. I miss coarseness and stupidity. I want violence.” Petra crescendos and misses her shot. She grinds the cue into her foot. The men near the jukebox shift in a herd. They seem aroused, but wary. Petra and Ellen are tuned to it, like a station.

“You girls out turning over dumpsters again?” Cousin asks. He has called Ellen’s machine to tell her he’s going to bed.

Petra and Ellen stop at Cousin’s on their way home from Thirsty’s. His light is out. It’s not like either of them to drop by without calling. Petra goes to his bedroom window. Ellen wonders how Petra knows that it is his bedroom window. Then she remembers that Petra went to his Halloween party.

Cousin lifts the corner of the blind away from the window. It is dark in his room and at first Petra can’t see him.

“Not dumpsters,” Petra answers. Ellen can’t hear him. “Lawn signs. Get up.”

Ellen watches Petra talk to him then moves to the window herself, full of dread. He’ll be unhappy to see her. When she sees his face, he surprises her by smiling.

Cousin lets the blind fall back against the window, and the women go to the car.

“He needs a lobotomy,” Petra says.

“He’s had a lobotomy,” Ellen says.

“I’m glad you’re not talking about me,” says a man who passes them on the sidewalk.

“But he’s good in bed,” the man says over his shoulder.

Cousin jots down notes for the fly trap story, “Flying Too Close to Venus.” Venus Fly Traps in the Bog. He can make it scary. He can tell it from the fly’s point of view: getting suckered in, lured in by juices. It’s involuntary, a trick of nature, survival of the species. He only thinks he likes it. He should remember from the last time what really happens, zap, you’re dead, wrapped up like a mummy before you can blink. Gotta keep your wits about you, visit other plants, avoid the dread Venus. Moral of the story: a great place to take the kids for a study of nature and of things to come.

He calls Petra. “You,” he says. “Out turning over dumpsters again.”

“You missed it,” Petra says. “Not everyone would forget to inhale.”

“What are you doing now?”

“Ellen and I think you need a lobotomy,” Petra tells him. She chews on the end of her pen and uncaps it to cross out a line.

“We said, at least, that there’s hope for you.”

“That’s good. Glad you decided that.”

“Well, maybe we can pound on your window tonight. Right now I have to finish this schedule. I’m really behind.”

“Talk to you later,” Cousin says, his finger on the button.

“There’s the other hooligan,” he says when Ellen answers the phone.

Cousin hoists the barbell to his chest and hovers it. Think fly traps, he tells himself. Fly Traps in the Mist. He does twenty reps, and the phone rings.

“Do you want to do something or not, because if you don’t, I can do something with someone else. If you do, I can think about it.”

“Tonight I might actually want to do something,” Cousin says.

Fighting with a woman is the essence of life, Cousin writes. He slices open a boneless chicken breast and opens a package of spinach. Chicken ala spinach e garlic. He knows a little Spanish, a lot of English.

The woman in Seattle is not the communicator that Ellen is, but she is a fornicator, and she rides horses. She says that anyone who would jump into something the way Ellen has is unstable. Ellen has a problem.

When he tells Ellen this, they are lying on the sofa. He has just returned from a second trip to Seattle. Ellen mulls it. Finally she says, “I see it.”

“The woman in Seattle is normal. You like her because she’s normal. She’s never been to a shrink. She’s an equestrian. She has the same friendships she’s had since high school. And she has you, man with a tan.”

Cousin mixes their drinks before slinging her over his shoulder and carrying her to bed. Ellen rides out her hatred and his. She erases her mind with the back of her hand. She slips around next to him, backs into him with her ass. He gets behind her and in. She arches, dodges, clamps her eyes wide, bites his wrist, arm, hand. He nearly strangles her. I hate you, I hate you, I hate you, she thinks. This goes on until he stops, the only sign of his coming.

“Couldn’t you fake one,” Cousin says and rolls over on his back.

He stares ahead without seeing, unaware of having seized the sweetness of his time. 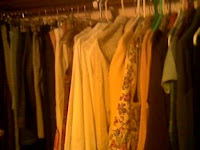 I shop like a man. I go once a year, maybe twice. I buy staples. I buy plain colors. I dress for work and weekends. I dress to impress with my height, my stature, my stance, my pose, my ... grace. I wear long things that would sweep the floor on a shorter woman. I buy what fits. I buy what is easy to wear, what is comfortable. I try to avoid dry cleaning. I avoid ironing. While I'm shopping, I imagine an audience in dark clubs where poets read & musicians play. I imagine lighting, decks of ships, ferries that waltz across the harbor in Duluth, and ship channels. I imagine islands where people go camping. I go to Goodwill and buy used clothing. I buy frivolities cheap -- a flouncy skirt for $5.99, a cheap thing, and return it. Sex is not in this wardrobe. It is not part of the agenda. A windfall & a small budget at Macy's took me shopping to the mall. I bought: 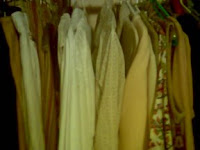 Best finds are an ankle-length brown skirt & brown knit jacket; black applique tiered skirt; patent leather ankle boots, and pin-striped J & Co. jeans. I also like my used pointy t-straps, Coach sandals, black clogs, black leather bag, brown eyeliner, russet mascara, and Viva Glam lipstick. I like the Michael Kors long dress for summer and the three white blouses. I like being back in basics again: white, black, and dark brown scoop necks, v-necks, and turtlenecks. I like the fun of a cashmere poncho. I liked getting for $20 the $276 cropped embroidered pants at Bella Blu in Navarre that Sheryl Crow wore in a magazine photo. I shopped after 13 pounds weight gain, which began when summer was over. I gave away durable clothing I had outgrown. I gave it to Goodwill for resale.
Posted by Ann_Bogle at 5:25 AM 1 comment:

Grand i flora Hosta in Autumn 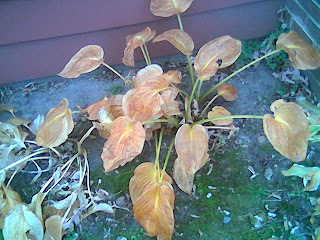