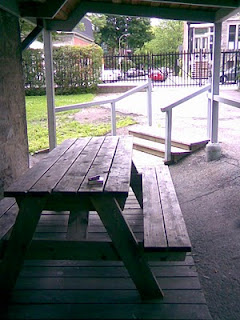 She lets her intentions guide her

Evelyn is 42. I listen as she explains that her “heart goes out to her”—to the woman whose husband she's stealing; there's no credit in that, I say, maybe in heaven. I listen as if to a speech by Obama. She could get a job that way, but I know she's afraid to be hired. She relies on our mother and calls her arts and crafts minor.
A friend of Evelyn's has canceled plans for the evening, and I am her fall back. We sip the beer I brought. I look at the flowering pots she's seeded on the balcony. She says she's glad she grew up in a liberal faith.
The handsome French husband's slender American wife lives with the two boys in a Victorian house across town. He calls it a marriage for Immigration. He takes Evelyn rock climbing. I take up his side when I hear he's romantic.
The American wife and Evelyn know people in common who send Evelyn angry messages. They're angry because they thought they knew her. They are New Age. Hell is unsketched in the notebook of New Age people. “There's a balance in heaven for mistresses,” I say, thinking “mistress” could be a pride word, but Evelyn admits to no name, only to love for the neighbors. “Is he your neighbor's husband?” I ask, inviting her to explain whether neighbor applies to women who covet—“deliriously desire”—husbands from Angers.
Posted by Ann_Bogle at 4:15 PM No comments:

"Fiancée" at Istanbul Literary Review, May 2010.