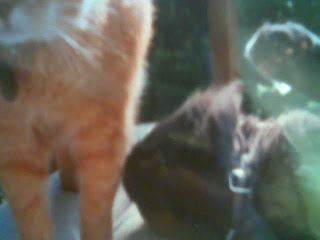 Fiction International is "the only literary journal in the United States emphasizing formal innovation and progressive politics. [Its] thematic issues feature controversial fiction, nonfiction, indeterminate prose, and visuals by leading writers and artists from around the world."

Fiction International is sponsoring its next theme issue on animals. The deadline for submissions was December 15. Even though I had written nothing about animals that I could send to the journal, the idea gives me the spur to write about my cats and their life experiences. 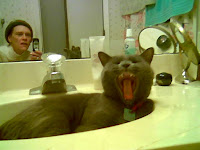 Francis was a good, gray, wool cat whose father was likely Himalayan, which accounts for the way he strutted the barriers of the yard, walking on fences and edges, as if he had read the deed. Fran died on March 31, 2005 at the age of nearly 16. His birthday was May 8, 1989. We still miss him and end up lavishing too much motherly attention on his successor, Walter (Wally), whom we picked at the Humane Society on January 22, 2006, almost one year ago. Wally's papers indicate that he was 8 months at the time of adoption, placing his birthday some time in May 2005.
Posted by Ann_Bogle at 8:35 PM No comments:

When Francis died, he died twice. He had lost half his body weight -- 13 pounds down to 7 pounds -- and he had lost the hair on the sides of his body due to renal failure. He had made a trip to the hospital just a few weeks before that and had regained half a pound after a feline version of dialysis. He weighed 10 pounds again within a few days back at home, then boom, his bottom suddenly fell out; his weight plummeted and his hair fell out. On his final day, he ate, drank water, visited the litter box and even went outdoors.

Fran was an outdoorsman cat and used to hunt each day as if he were on pest patrol; he headed out each morning like a fireman. The last day was no exception, even though his walking was weak and impaired. We were very fortunate in Francis that he was never attacked outdoors or hit by a car, even though he shared the woods with deer, raccoons, foxes, owls, hawks, and later a coyote. He survived a scare with neighbor dogs once in Houston, and that is the lesson that taught him to stay in his own territory and not stray. He led an adventurous life without injury.

On his last day, we lay in bed together looking into each other's eyes, something we liked to do anyway, and suddenly his eyes glazed over, and he wasn't there anymore, even though he was still breathing. I got up, called the vet, and we made an immediate appointment to bring him in. Emergency resuscitation would keep him alive over the weekend, she said when I got there. She estimated he could live one month more with constant dialysis. Since I wasn't paying the vet bill myself, I estimated what it might cost. The weekend alone would cost $750. I asked the vet about euthanasia. We began to discuss it. She asked whether I was satisfied with the time I had spent with him until recently. 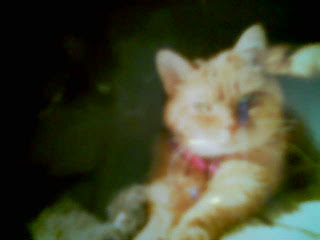 Since Fran had the chronic rather than acute type of renal failure, we had managed to have a lot of quality time together, to the point of literally falling in love with each other after my other cat, Lucy, had died in 2001, also of chronic renal failure, a common condition in older cats. I reluctantly agreed to have what was left of Francis put to sleep, as much as I wished he might die naturally on his own. His body was still too strong otherwise, and he might go on breathing, his heart beating, but never return to consciousness.
Posted by Ann_Bogle at 8:33 PM No comments:

The vet put an IV in Fran's arm and injected him with a lethal dose of barbiturate. Fran's head folded over his paws, and he slept.

Because he died twice, once at home and once at the vet, his eyes and mind first, his body second, there were a series of visions after that. He appeared to me as a ghost, growing ever woolier and wilder, until he looked in the passage like a wolverine. 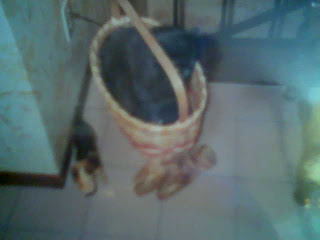 In the winter Francis sat in the utility room downstairs, in the corner of the room called the sump area, a dugout rough and rusty looking, where the pipes all meet in vertical poles. His winter hunting was limited mostly to indoors, since he disliked snow on his feet and left the outdoor animals alone during the cold months. He captured about three mice indoors per year by staking out the sump area of the utility room. This hunting of his reminded me of ice fishing. He sat there in the dark in the middle of the night, concentrating steadily, staring straight forward. I would come upon him doing his night ritual if I went into the utility room to do something -- throw away something in the large wastebasket or get a hammer or screwdriver or change the litter box. There he might be, staring straight ahead, prepared to kill mice, or mice in theory. The number of times he managed to do that -- catch mice indoors -- reminds me of publishing, the number of times writers manage to do that, though they hunt indoors and fish for it.

The day after he died a mouse ran at me, where I stood in the middle of the office; I was in fact trying to think of a beginning of a life without Fran, without Lucy. The mouse ran directly down the center of the hallway, veered into the office, and charged almost at my feet then turned away and ran to the utility room. Aghast, I thought we might be infested now with mice. Fortunately, that is not what happened. There was one mouse only, and when it died of starvation in the utility room, it smelled.

Immediately following upon Fran's death, rabbits, among his favorites for hunting, gathered in the back yard under the birdfeeder and stood there. They were not hopping, not running, and not hiding; they were standing about and lingering, loitering. I had never seen rabbits loitering before, regarding their cousins.
Posted by Ann_Bogle at 2:22 PM No comments:

"It's kind of fun to do the impossible."
"Pure religion is Love in action."
"Move forward."
"Friends are more valuable than money."
"Life Is Art, Your Every Thought And Action Is Your Unique Creation."
"If you don't do it excellently, don't do it at all."
"Good ideas come free of charge."
Posted by Ann_Bogle at 3:10 PM No comments: 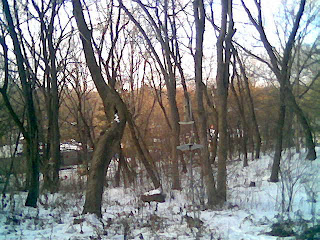 At home I give soliloquys about writing, theater, art, and religion. Christmas this year is vacant. We are glad that it snowed. The ground before that -- and the sky -- seemed barren. Snow is welcome and reassures us of the season.
Posted by Ann_Bogle at 12:12 PM No comments:

This is my only addiction: to tobacco. I drink coffee, too, but have studied and learned that coffee is high in anti-oxidants. Perhaps health gurus might enlighten us on that subject. The cigarettes I smoke are the best ones available: Nat Sherman and American Spirits and have no harmful chemical additives. I switched to those ten years ago. My goal is to cut down on smoking until I smoke only three packs per week instead of one pack per day. I still sometimes enjoy them (the good cigarettes), but I dislike the scratchy feeling in my vocal area. Otherwise, I have no health problems related to smoking. My teeth are strong and clean-looking. I have gone to the dentist twice per year since earliest childhood and have had few dental problems. My mouth looks a little slack since I gave up wearing lipstick as I used to -- all day. I wear lipstick now if I'm going somewhere interesting.

I drink one glass of wine on holidays, the last time was on Thanksgiving. The wine was red. I like Rolling Rock and am willing to drink as many as three of those if a good and kind man is buying, but that rarely happens these days. Technically, we ought to consume three glasses of clean beer or wine -- homemade elderberry without sulfides is great -- per day. I would find that difficult to do, even though it is a health recommendation, due to what are called blue laws in our state. Religion in urban and suburban Minnesota consists mostly in policing and hospitalizing for real and presumed alcohol use, and it produces much sickening revenue for the cities, which would be put to better use if given to the volunteer force. Really we suffer a lack of health awareness about alcohol and stupidly wall off joy and interest in life. Mayo Clinic approves the level of drinking outlined above; I would include clean (organic) beer and wine (3 glasses of wine or bottles of beer) as a food group, to prevent heart disease. I disapprove of people doing too much exercise and exercise for vanity and personal power and prefer walking, biking, swimming, ice skating, and yoga for myself.

All is good so far without medications since September. I have stabilized at 125 pounds. I would rather my weight were higher but am willing to continue to cut down on smoking to see if that will boost it. The anti-depressants I was taking were hard on my body generally and caused numerous health disturbances, including GERD, which has cleared up at long last not on the drugs. The so-called stabilizers, lithium, especially, were better; since I am not depressed or otherwise medically suffering, I am taking a much-needed break from all of it. This is saving the government in tax money, too. Now all I lack are appropriate compensation for my cultivated and specialized skills, knowledge, and information and a group of dear, good, new and older friends.

If it is perceived that I used drugs and alcohol besides those for major depression (starting in 2001) and PTSD (bipolar disorder) the perception is a wrong one. I quit drinking in 1997 -- almost 10 years ago -- when I had reached the level of one pint of vodka per day for three months. Before that, I sipped a 12 pack of beer per day for three years whilst occasionally (once or twice a month) indulging in a half gram of urban cocaine. I haven't even seen illicit drugs, besides one gentleman farmer's homegrown pot, since moving to Minnesota almost 11 years ago -- thank God.
Posted by Ann_Bogle at 11:15 AM No comments: