"Free Verse: The Collaborative Artists' Book"
A review by Ann Bogle
at Laura Hinton's Chant de la Sirene: a weblog on poetry, performance, and the hybrid arts
April 20, 2009
Posted by Ann_Bogle at 11:42 AM No comments: 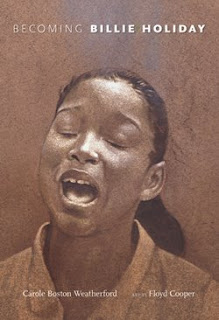 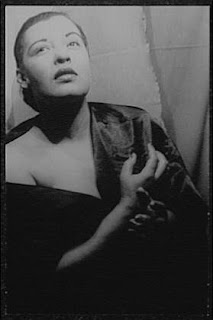 What led Billie Holiday to move from Baltimore to New York?

At age 12, Billie—or Eleanora as she was known then—had the body of a woman. She gravitated to the night life, singing in afterhours spots, drinking bootleg liquor, smoking then-legal weed, and getting roughed up by older men. To protect Billie, her caretaker urged Sadie to come get her daughter. Sadie arranged for Billie to join her in Long Branch, New Jersey. But Billie rode to New York instead, determined to see Harlem. Picked up by a social worker, she stayed in a children’s home until someone could pick her up. After Billie got fired from the maid job that her mother had arranged, she and Sadie moved to New York—just as the Harlem Renaissance was fading into the Great Depression.

From “Love for Sale”

Harlem was no Promised Land;
it was a sea of black folks, striving
to rise from fields to factories
or from hard-luck to street hustles,
flowing through clubs and churches
grooving on Jesus and jazz.
Harlem was a black sea that parted
each night for white partygoers
with money to burn and cares to shed.
I was swept by the tide.

"When I was growing up, I was intrigued by the Harlem Renaissance. I was introduced to the poetry of Langston Hughes in elementary school and have loved it ever since. Hughes even wrote a poem entitled 'Song for Billie Holiday.' "

My story, paraphrased in italics:

I got my first bikini when I was in fourth grade. Until then, the popular girls my age had worn one-piece bathing suits. Mine had been orange with holes cut into it. I picked that one because it was like my Barbie’s. My Barbie was actually the red-headed Stacy, but she had the same body as Barbie. My bikini was red with navy blue and white flowers on it. The bra was padded, and there were little ties at the sides of the bikini bottom. As my first act in the bikini, I decided to stroll across the park to see my friend, Lori. I didn’t wear shoes or a cover up. I can still remember the rough feeling of the yellowed grass underfoot. Halfway across the park, Mr. Stanchfield appeared at the end of his fence. He had trained a pair of binoculars on me as I walked across the park in the bikini. I remember thinking, what is wrong with Mr. Stanchfield that he wants to watch a fourth-grader walk in a bikini? I thought, this may be my punishment since my parents didn’t stop me.

(I was still flat but I had started to grow pubic hair -- “public hair,” as one boy had pronounced the word from a sex manual.)

(I had an absent-minded, but not permissive, mother who rarely looked up from her gardening, and my father, later secretly and wrongly accused of child molestation by my adult male partner, averted his eyes if he saw me in a bathing suit. Blocked memory theory had caught on before there was literature to defend it/us/them.)

(My adult male partner was a devoted reader of Nabokov.)

(I have the demonstrated genes for bipolar -- I now know -- so my young thinking about these and other subjects might already have been bent. Bipolar theory had caught on with the doctors before there was literature to defend it/us/them.)

The paragraph and notes above are not literature. The story precedes, in time, the boy sexual violence that ensued in the same park. Though I wrote a novella about it, more remains to be told. My adult male partner, who during his adolescence in the 60s had been the target of bullies, had reasoned that a girl's sexual abuse by boys in the 70s could not have been serious enough to account for long-term emotional variations related to violation. It's an argument, but I didn't make it, that it had been a set-up. The novella was good enough for entrance and fellowships to creative writing programs, but it was not good enough to get past the praise stage with a handful of editors, who didn’t publish it. Teachers had told us “novellas” don’t sell.

It seems that there is a dearth of fine literature about the subjects Lolita covers and the subjects it misses. One other book has been named, and that is Toni Morrison’s The Bluest Eye. It seems possible -- yet this group is not suggesting that it has happened -- that from among the group of victims and survivors, which, to judge by responses on the women's poetry listserv, seems large -- there might come literary works of merit that tell a story (a version of the universal girl story) that could trump Lolita, a book as good as To Kill a Mockingbird that addresses the single blindspot in it.

Later, though this is only marginally related, I named the 1998 version of my short story ms., The Universal Girl for It, but no one was buying -- not even a women’s publishing house, not even a publisher who subscribes to this list. Teachers had told us short story collections don’t sell -- agents aren’t interested in them. The same ms. is now called Institute of Tut. (The “institute” in the title likely refers to creative writing programs, but it may also refer to the internet. I learned after I had renamed the ms. -- written over 20 years -- that I had had an uncle-in-law named “Tut,” a physicist, married for 50 years to my aunt, also a physicist.)

My friend, Vikram Chandra, a devoted reader of Trollope, assures me that my favorite Trollope title, An Unprotected Female at the Pyramids, is not one of his best.

A short draft in feminism

In discussing women's poetry on a listserv. with all its attendant internet implications -- but in life, too -- I realize it's not wise to assume that "feminism" is at play just because it is women talking or that it's not because it's men; what is meant by feminism is our stories in relation to it and it in language.

I feel a social relief in mixed-gender poetry environments where though few people are discussing "feminism," all are inherently influenced by it and responding to it in their writing. "Feminism" is occurring between the lines. I'm thinking of one friend who said she found Isis-in-Genesis between the lines.

As feminists in college in Madison in the early 1980s, we were not allowed to read "the boys" or talk with men. Men, real men, all of them, were the enemy. I had just become an adult and had plenty of good associations with elder relatives, men and women as teachers in childhood, men at church; I had had mixed experiences with boys [related stories include "1974, What I Wanted" at fwriction : review and "Hysteria" at Camroc Review Press], and for that reason I was a feminist. Never to speak with or meet with men in our groups and to be suspicious of every male artist or writer because he was male -- the men I knew in college except one were gay -- affected life then and later. It was helpful to read women writers on my own, [...] but it was like being spayed for traditional life at 19 to hear the feminists' oral commands -- few in that rival-leftist environment felt free to have children or to shave.

[Mud! That paragraph is mud.]

I lived in a radical separatist commune when I was 20. It had been founded by Harold Groves as a first black sorority in the 1940s.  Lorraine Hansberry lived there no later than 1950. In 1982, there were fourteen women -- bisexuality was not acknowledged in that setting though in practice it might have been taking place -- abortion was expected if anyone got pregnant. Rape was a common experience for many of the women, who formed non-monogamous unions before flitting on to the next "crush." Not one of the women (ages 19-38) said she wanted to marry a woman, not one. For me, not one long-term friendship formed or lasted beyond the co-op.

If it's true that fundamentalist Christianity took over the Republican and Christian agendas, is it the story that radical lesbian separatism took over the feminist agenda for a long time and then poof! there was no feminism, only post-feminism?

Was it anti-feminist to have children with a man? Or was it for zero population growth the separatists separated us? Was it religion in hiding? I realized later that there had been men who wanted "no-strings-attached" sex without the result being children. I learned that hippies' children were raised in the countryside like contraband. I realized that the hairy lesbians of the 80s were hippies. I still talk with women who were there who never had families, though they'd wanted families, who have sex with men, their affectional preference, who are not married (defined as a patriarchal institution).

Many instigators of separatism were middle-aged divorced professional women with children who had "come out." Later, even the word "lesbian" seemed to go by the wayside in preference for the word "gay." I've gathered that the left in general is relieved that gay men and women formed a coalition. I have had gay friends of both genders and hardly know what each of them thinks about gay marriage for him- or herself. Some advocates want the legal right to marry within their gender without wanting marriage.

[The right to marry another person, regardless of gender, represents an expansion of rights for all.]

Because of my initiation, I'm frankly quiet around contemporary discussions of feminism, but recently I've been asking. One white woman friend (a cw adjunct) spit out recently, "Black women hate white feminists." Snap! but the conversation ended there. She thinks she knows what I think I don't know about what feminism means to groups.

There was a great distinction then between lesbian street feminism and campus (academic) feminism that had partly to do with ethnicity (race) and class. The women's studies courses were superior -- the result of fine scholarship -- and the street ethics related to violence. In lesbian separatist S/M, violence was protected.

In the post-feminist world, due to my studies in women writers, I feel roots there and gravitate toward works by women poets and philosophers, though I have read as many men. [Insert list for skeptics of every book I've ever read and how I feel about it.]  I've read and re-read Shakespeare or seen his works performed. Years of Shakespeare, yet what do I say about that creator's wife inheriting only his second-best bed? Or about the men's suicides, depressions, alcoholism, homosexuality or multiple marriages? I just found a bit of research at Salon.com about Sylvia Plath's menstrual cycles as the cause of her suicide, partly contesting an interpretation of her as manic-depressive.

Yes, jouissance -- I remember it; it happened to me in Irish bars with certain men. [What is the opposite of gender?]

I hear complaints about affirmative action from men in academic careers who believe their own careers -- including their publishing -- would have flourished without it. Though I won several incoming fellowships and kept high grades and published from 24 on, attended two Public Ivies and one privatized writing program within a public university setting, I landed zip. I volunteered as editor and teacher and lived with my mother for years. Yet I still read as if I were an academic insider. That poetry circles include wives and non-academics is a significant help.